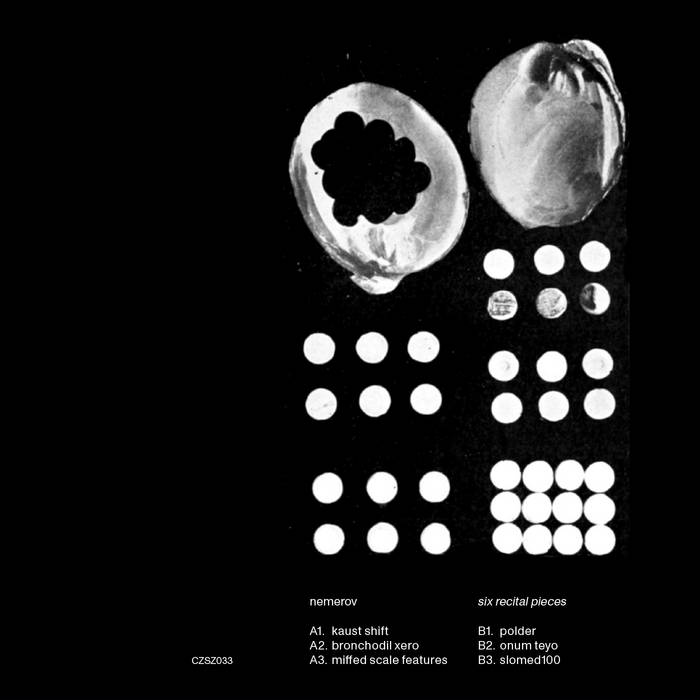 "Gabor Gyulai aka Nemerov's previous identities and chain of aliases are rooted back to the 8bit-chiptune movement of the end 00 years. I met him during a later phase of his artistic transformation, he became Nemerov by then, and his live performances were refreshingly inspiring post-wave industrial-proto-tech-whatever mutations with glitches or just wonderfully hypnotic irregularities. His recorded materials could never capture those live moments though, because he never really did two similar live sets either, and he just followed different paths while creating music at home. And was in constant mutation. Still, I believe "Six Recital Pieces", even if it's yet another and new phase, comes the closest to those moments and some of the energies I experienced during his best live sessions - and it might be his best recorded material to date.

With "Six Recital Pieces" Nemerov incorporates some new idioms of the ever mutating electronic club or non-club music tradition into his own language, while re-imagining and probably even unconsciously re-interpreting his own post-idm chiptune roots. His mutant electronics now are more tightened by new era electro structures, but mostly in a more and more deconstructed way towards the second half of the record, which made me revive some of my vague memories of the Artificial Intelligence series from the 90s. Still, it has nothing to do with revivalism, it's a living and contemporary record of the alternative reality of ours, full of glitches, illusionary moments, unclear purposes and cyber contemplations. And after all with the track Bronchodil Xero Nemerov even produced a hit for his ever mutating music physiognomy."

nemerov.bandcamp.com
Track 1 and 2 were recorded on the 4th session of Noise n’ Roses / Budapest HU