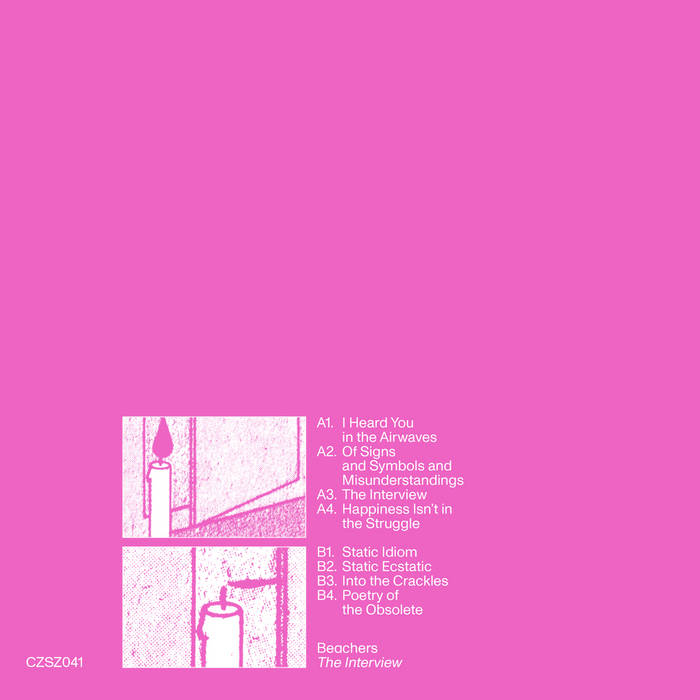 Tristan Bath Intensely psychedelic and headspinning experiments with radio. Beachers persuades rhythms to scurry out of the static. Dark and glistening music for when you can't sleep. Favorite track: The Interview.

“The Interview” is Beachers’ playful exploration of the physicality and movements of radio transmissions. Conversations half heard in the static void, rhythmic patterns emerging through the interference.

The eight tracks are built on samples collected using a cheap, second hand and perilously unreliable hand-held radio, the weird quirks of medium and object the heart of the album. The connection between tactile movements of hand on device, and how these are reflected in sound, shape all of the tracks, smooth glides between stations mixed with abrupt drops between broadcast and noisey ether. Radio’s potential to be immune to absolutes and instead reside in spooky inbetweens.

The radio sounds are augmented with electronics, samplers and synths, arranged in an attempt to capture the same indeterminacy and odd epiphanies possible with fingers on a radio tuner. The title of the album is reference to an evening spent switching between two separate talk radio shows, to the point something approaching a new conversation could be created between radio programmes. The title track itself focuses on a snippet of one of these broadcasts, and the weird musicality than can be found in our speech.

Beachers is the electronic music project of London based Daryl Worthington. He works in the crossovers between accidental and composed sounds, hi and lo-fi audio, with a particular interest in the beauty to be found in the mundane.

He has released music on labels such as Fractal Meat, Czaszka (rec) and Never Anything Records. These take in an array of approaches, mixing analogue synthesis, field recordings, cassette tape collages and sample-based music.

His approach is rooted in DIY and homemade approaches to music making. He co-runs the Bezirk tape label, and has regularly organised experimental music events in London.